Coverage for all of Tennessee High School Football

Coverage for all of Tennessee High School Football 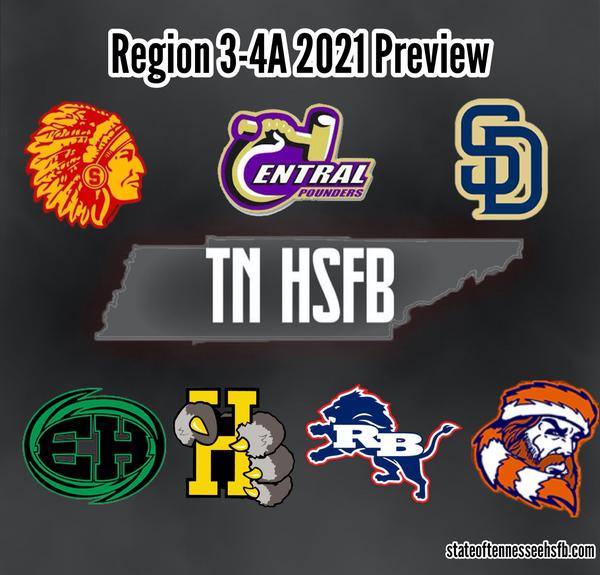 Region 3-4A is a very talented region with several teams that will be new to 4A, whether that’s from moving down from 5A or moving up from 3A. Red Bank and East Hamilton are the clear favorites here, but teams like Soddy Daisy and Chattanooga Central are programs to watch out for as well. Teams in this region include Chattanooga Central, East Hamilton, East Ridge, Hixson, Red Bank, Sequoyah, and Soddy Daisy. Chattanooga Central Key Returning Players: RB Michael Watson, WR Tyi Mosley, QB Evan Schwarzl Key Losses: OL Brandon Williams, WR Jacob Leftwich 2020 Record: 2-8 Chattanooga Central had a very young team, and this caused them to struggle throughout the 2020 season. Running back Michael Watson will most likely carry the load offensively for the Purple Pounders, and could be one of the region’s best players next season. Expect Central to contend for one of the region’s final playoff spots. 2021 Schedule Prediction (Wins in Bold, Losses in Standard Font) Campbell County at Franklin County at Soddy Daisy Hixson Red Bank Clinton at East Hamilton at Sequoyah East Ridge Record Prediction: 3-7 (3-3) East Hamilton Key Returning Players: WR Kaunyae Burgans, ATH Jeremiah Flemmons, RB Juan Bullard Key Losses: QB Haynes Eller, OL Brandon Williams, OL Gavin Galloway 2020 Record: 8-4 East Hamilton returns several talented players from a team that had a successful season last year. Even with the loss of quarterback Haynes Eller, the Hurricanes have plenty returning on the offensive side of the ball, including jack-of-all-trades Jeremiah Flemmons. Expect East Hamilton to contend for the region title in 2021. 2021 Schedule Prediction (Wins in Bold, Losses in Standard Font) Ooltewah at Portland East Ridge at Sequoyah at Paul Bryant (AL) McMinn County Chattanooga Central Soddy Daisy at Red Bank at Hixson 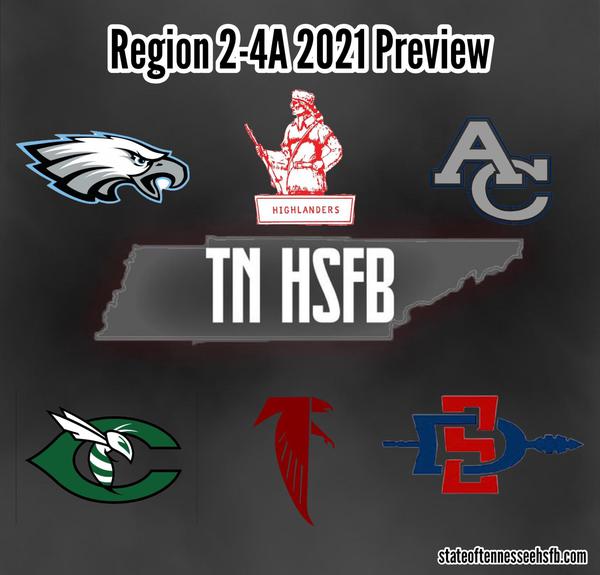 Region 2-4A is a very talented region with multiple teams that have the talent to make deep playoff runs. There are also several players who could be Mr. Football candidates, which is something you do not see very often in the same region. Teams in this region include Anderson County, Carter, Fulton, Gibbs, Scott, and South Doyle. Anderson County Key Returning Players: RB Gavin Noe, QB Walker Martinez, WR Bryson Vowell Key Losses: WR Josh Miller, LB Stone Cummins, OL Maxx Oglesby 2020 Record: 9-3 Anderson County returns a ton of talent from their 2020 squad, and will have one of the state’s most dynamic offenses in 2021. Gavin Noe was the region’s offensive player of the year last year at running back, and Walker Martinez looked like a potential star after filling in at quarterback for the Mavericks. Anderson County has the talent to compete for a state title, but 4A is loaded and the Mavericks have a VERY tough first six games. They may start out slow, but those games will only make them better for the latter part of the schedule and the playoffs. 2021 Schedule Prediction (Wins in Bold, Losses in Standard Font) at Powell Science Hill Fulton at Rhea County at South Doyle at Elizabethton Carter at Gibbs at Bearden Scott Record Prediction: 6-4 (4-1) Carter Key Returning Players: QB Chandler Wilson, WR Kaleb Harper, LB Damion Daniels Key Losses: WR Anthony Stocker, WR Colby Reynolds, DL Christian Wallace 2020 Record: 5-5 Carter is one of the teams in this region that is moving down from 5A, and the Hornets return several very good players that will help with that transition. Quarterback Chandler Wilson threw for 1,500+ yards as a sophomore, and wide receiver Kaleb Harper will look to be the main target for Wilson as the team’s leading returning receiver. Carter is definitely a playoff-caliber team, and don’t be surprised if they give South-Doyle and Anderson County a tough matchup, as well. 2021 Schedule Prediction (Wins in Bold, Losses in Standard Font) Knox Webb at Sevier County at Gibbs Walker Valley Scott at Karns at Anderson County Morristown West South Doyle at Fulton Record Prediction: 6-4 (3-2) Fulton Key Returning Players: RB Daveon Shenault, LB Keenan Vaughn, DL Bill Anderson, Key Losses: QB Tommy Sweat, WR Adriaan Roberson 2020 Record: 4-7 Fulton returns a very solid core of players, especially on the defensive side of the ball. On the offensive side, running back Daveon Shenault will be one of the region’s biggest breakout players in 2021, in my opinion. Fulton will be in a battle for the final playoff spot with Gibbs throughout the season, as both teams are very evenly matched. 2021 Schedule Prediction (Wins in Bold, Losses in Standard Font) at Austin-East Knox Central at Anderson County Knox West at Gibbs at Bearden South Doyle at Scott Farragut Carter Record Prediction: 4-6 (2-3) Gibbs Key Returning Players: LB Eli Hubbs, WR Bryson Walker, QB Bryson Palmer Key Losses: RB Patrick Spears, QB Colton Qualls, OL Zach Dyer 2020 Record: 4-6 Gibbs is losing several key players on the offensive side of the ball, but have several young players that could make a serious impact in 2021. Gibbs should be fairly strong on the defensive side of the ball, so expect the Eagles to lean on their defense more this season. I give the slight advantage to Fulton for the final playoff spot in this region, but don’t be surprised at all if it’s Gibbs that earns the final playoff spot. 2021 Schedule Prediction (Wins in Bold, Losses in Standard Font) Halls at Knox Webb Carter at Knox Central Fulton at Scott Anderson County at York Clinton at South Doyle Record Prediction: 2-8 (1-4) Scott Key Returning Players: RB William Young, RB Ashton Rowe, QB Alex Chambers Key Losses: LB Brandon Carson, OL CJ Collier, WR River Gray 2020 Record: 5-5 Scott will be making the transition from 3A to 4A, but are also losing a majority of their all-region talent from last season’s squad. The Highlanders have several talented offensive players returning, but are losing a lot of production on the defensive side of the ball. I would be surprised if Scott ends up being a playoff team, unless the defense steps up in a big way in 2021. 2021 Schedule Prediction (Wins in Bold, Losses in Standard Font) Coalfield South Doyle Austin-East at Carter at Pigeon Forge Gibbs Clay County Fulton at Gatlinburg-Pittman at Anderson County Record Prediction: 2-8 (0-5) South Doyle Key Returning Players: QB Nick Martin, RB Shawn Gary, DL Levi Herald Key Losses: WR Preston Sisler, TE Terrell Brown, LB Noah Myers 2020 Record: 10-4 After making a run all the way to the semifinals in 5A last season, South Doyle will be looking to bring back a state title this season as they transition to 4A. The Cherokees will have several key players returning from that team including all-state running back Shawn Gary. Expect South Doyle to not only compete for the region title, but the state title as well. 2021 Schedule Prediction (Wins in Bold, Losses in Standard Font) at Oak Ridge GCA at Scott at Bearden Anderson County Farragut at Fulton Knox Central at Carter Gibbs Record Prediction: 8-2 (5-0) Final Standings Prediction 1. South Doyle 2. Anderson County 3. Carter 4. Fulton 5. Gibbs 6. Scott 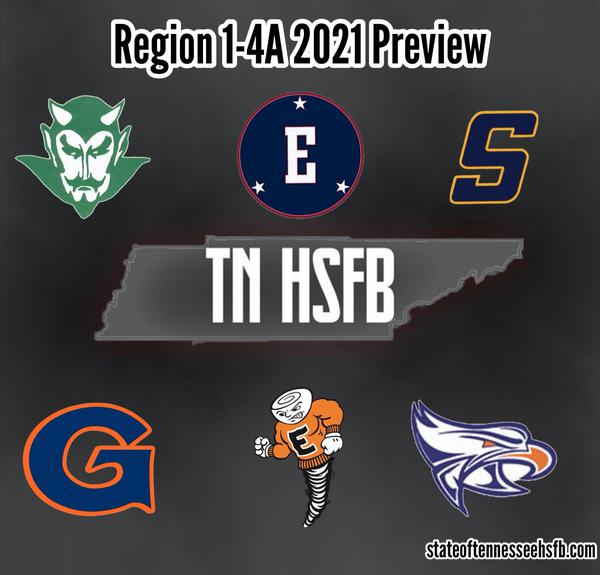 Region 1-4A is loaded, as it contains two state title contenders, along with a number of other up-and-coming programs. There are also several players that will contend for the Mr. Football award in Bryson Rollins of Elizabethton and Mason Gudger of Greeneville. Teams in this region include: Elizabethton, Grainger, Greeneville, Seymour, Sullivan East, and Volunteer. Let’s get into the preview. 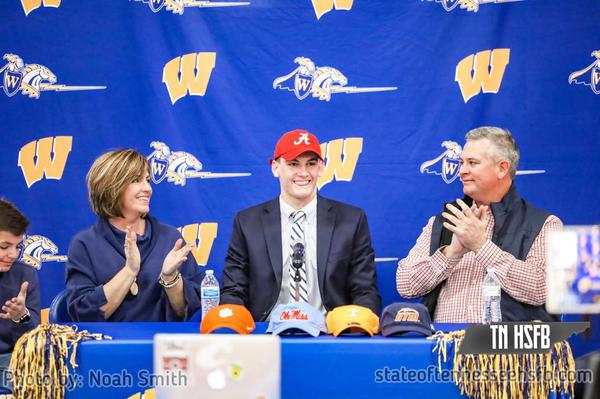 Ty Simpson had to make one of the biggest decisions of his life Friday afternoon, and every football fan in the state was on the edge of their seat to see where the coveted Westview quarterback recruit would end up. Simpson committed to Alabama, in a recruitment that really kept everyone guessing throughout the process. “It was an extremely difficult decision for me.” said Simpson, “I went to bed with a different school in mind, but I woke up and felt like Alabama was the best place for me.” His final five schools were Alabama, Clemson, Tennessee, Ole Miss, and UT-Martin. One thing that drove Simpson towards Alabama, was the coaching staff. “It really came down to player development and being NFL ready. Being coached by coaches like Nick Saban, Bill O’Brien, and Doug Marrone is something that you won’t find anywhere else.” said Simpson. Simpson is rated as a 5-star quarterback, and was a 3A Mr. Football semifinalist last season. The class of 2022 in Tennessee is arguably one of the best classes the state has ever seen, and not only that, but all of the top recruits are extremely close, so it will be interesting to see how this impacts the decisions of other top prospects in the state. 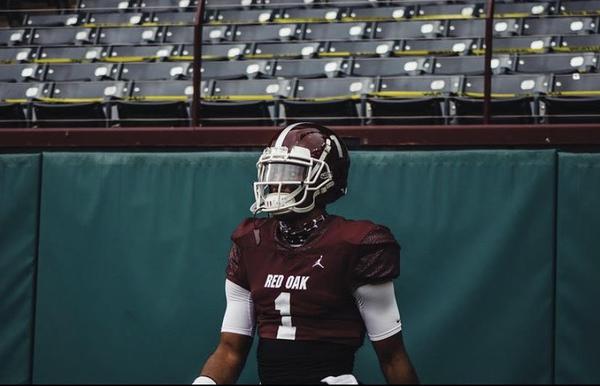 Ravenwood just added a huge piece to their football program at the most important position on the field. Chris Parson has transferred from Red Oak High School in Texas, and enrolled at Ravenwood, Head Coach Will Hester confirmed to stateoftennesseehsfb.com. Parson is ranked as a top 100 recruit in the class of 2023 by 247sports, and already holds offers from schools such as Iowa, TCU, and Virginia Tech. Parson played youth football in Tennessee for several area organizations, before moving to Texas. He has also played at Duncanville High School in Texas, who is recognized as one of the top programs in the entire country. Ravenwood will be looking to replace the production of all-state quarterback Trevor Andrews in 2021, and Parson has the capability to be a very good replacement. 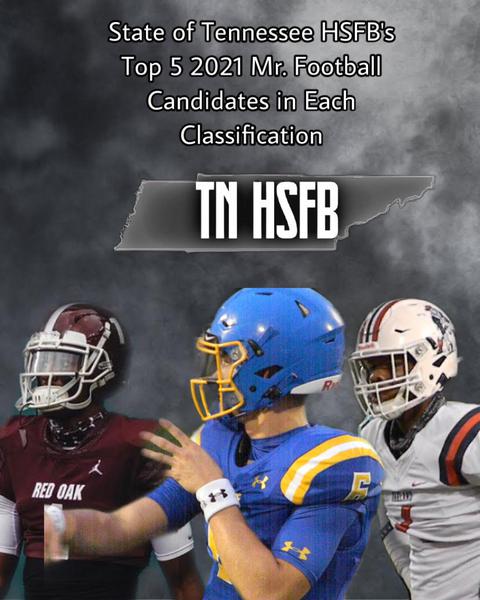 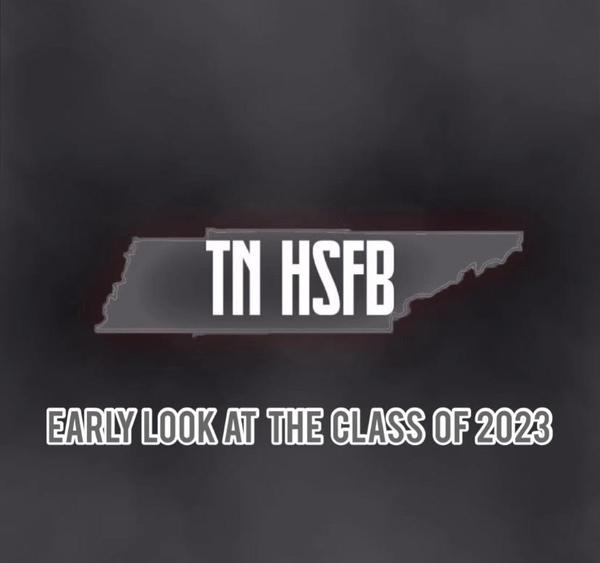 While the class of 2022 in Tennessee may be historically deep, the class of 2023 has no shortage of very talented players. It is way too early to put an accurate ranking on these players, as some potential recruits in the class haven’t even seen serious varsity playing time in their careers to this point, whether that be because of injuries, or being stuck behind talented and older players at powerhouse schools. Here’s an early introduction to some of the top players in the class of 2023, so far. 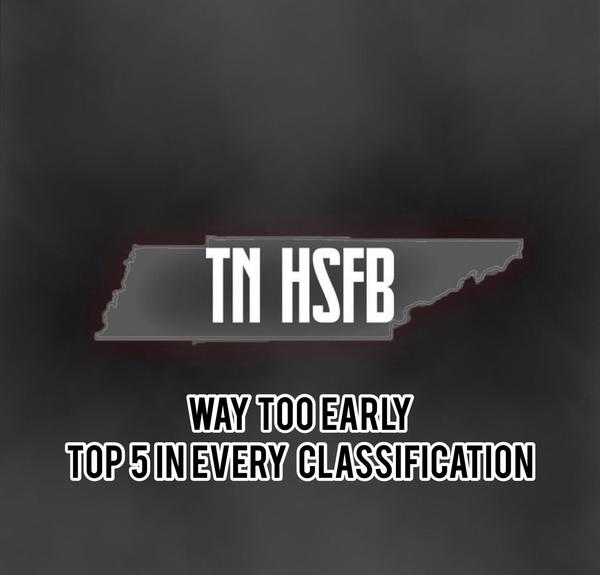 Way Too Early Top 5 In Every Classification

These articles are always fun. These will definitely change drastically as we get closer to the season, as players transfer, among other things. Without further anymore hold up, here is my WAY too early Top 5 teams in each classification. 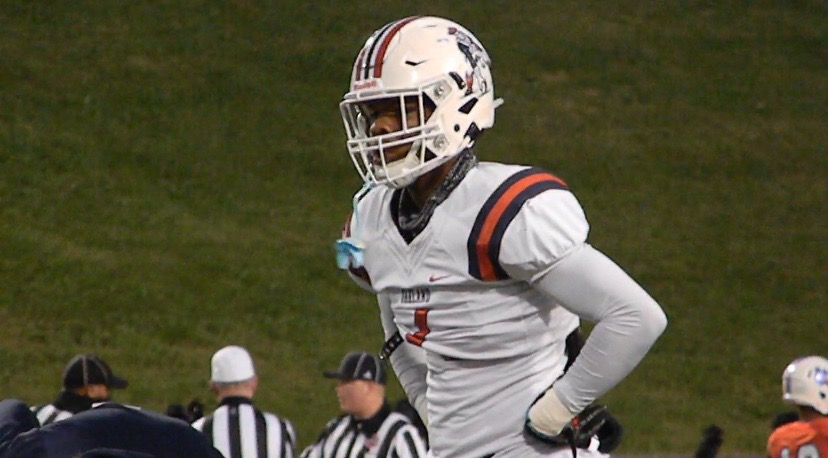 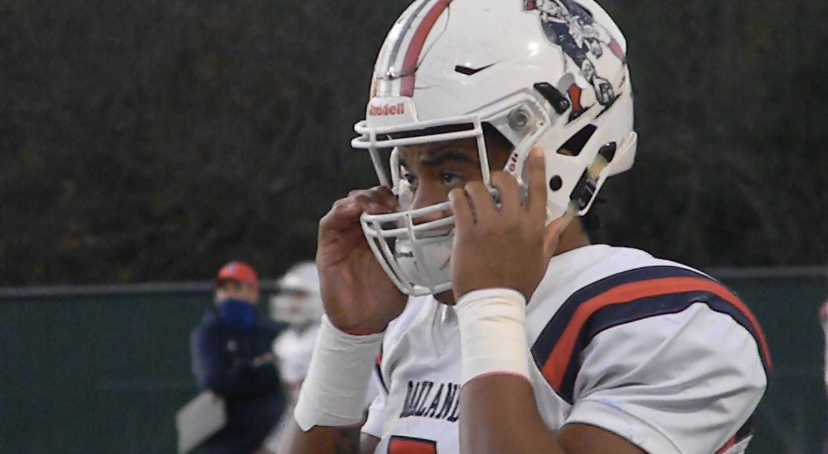 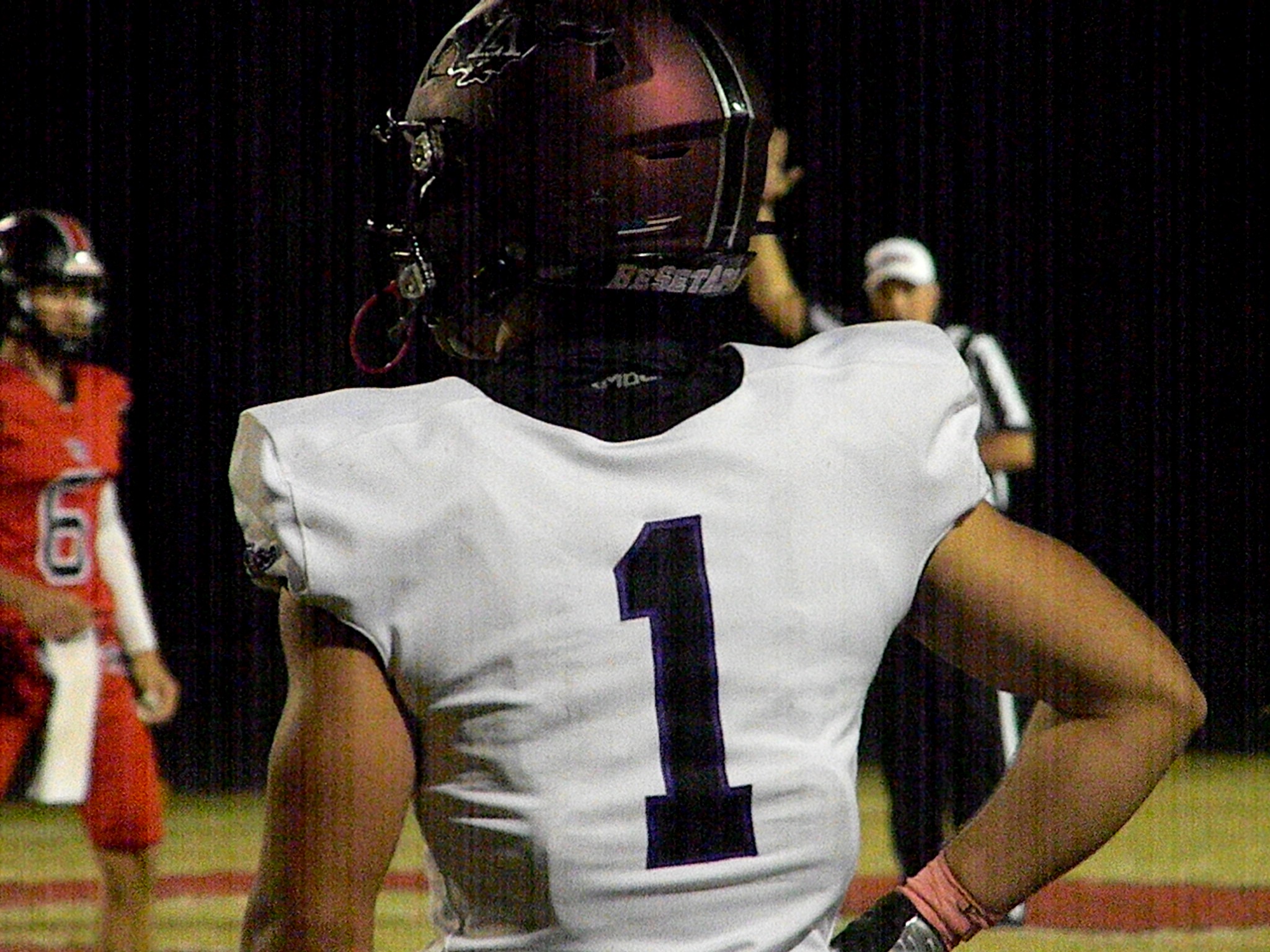 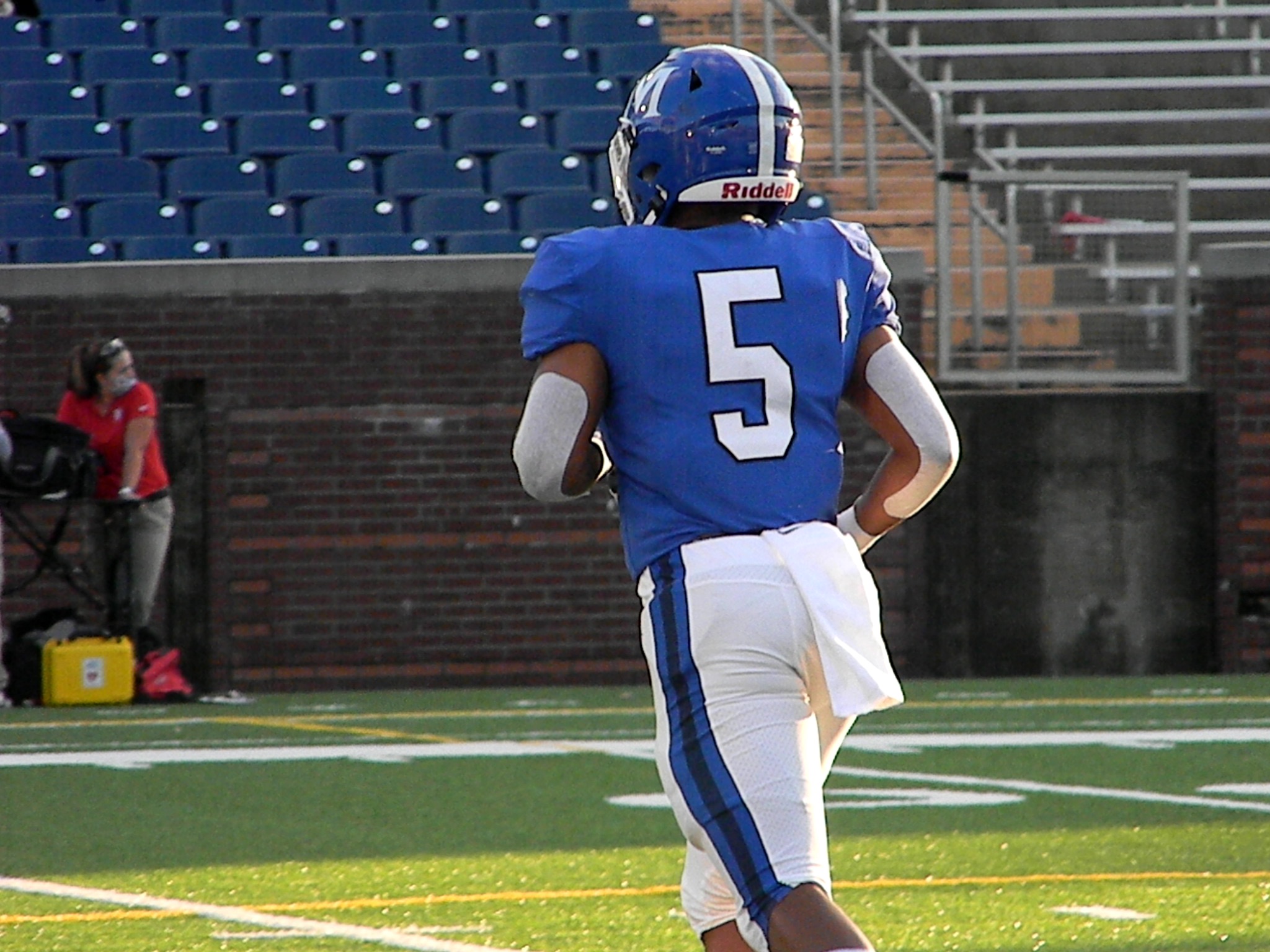